In this blog post, I will introduce user namespaces, explain why they are useful for containers and how they interact with Linux capabilities and filesystems. Then, I will explain the work we’ve done on two user namespace projects with Netflix: adding unprivileged user namespace support to FUSE and current work we’re doing to enable user namespaces in Kubernetes.

What are user namespaces?

In the example below, the two containers are configured to use distinct sets of user IDs, offering more isolation between themselves and between the containers and the host. Processes and files in container 1 of the example might have the illusion of being root (user id 0), but are in fact using user id 100000 on the host.

This possibility to appear as user “root” in the container but, in fact, be another user is an important feature of user namespaces. To go in more details about this, let me first sum up the history of this feature in the Linux kernel:

As an example of what that means, we’ll consider the scenario where a container executes the program “sshfs” to mount a ssh filesystem using fuse. Mounting a filesystem requires the capability CAP_SYS_ADMIN. This is not something normally granted to containers as it would give them too much power and defeats the purpose of isolation between the host and container.

When a container is set up without a new user namespace, the only way to allow it to execute “sshfs” successfully is to give CAP_SYS_ADMIN to it, which is unfortunate due to the negative security implications discussed above—even though “sshfs” does not want to impact the host. 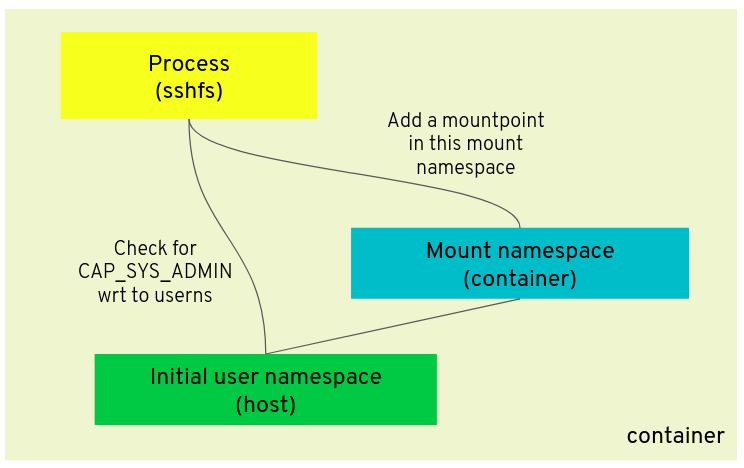 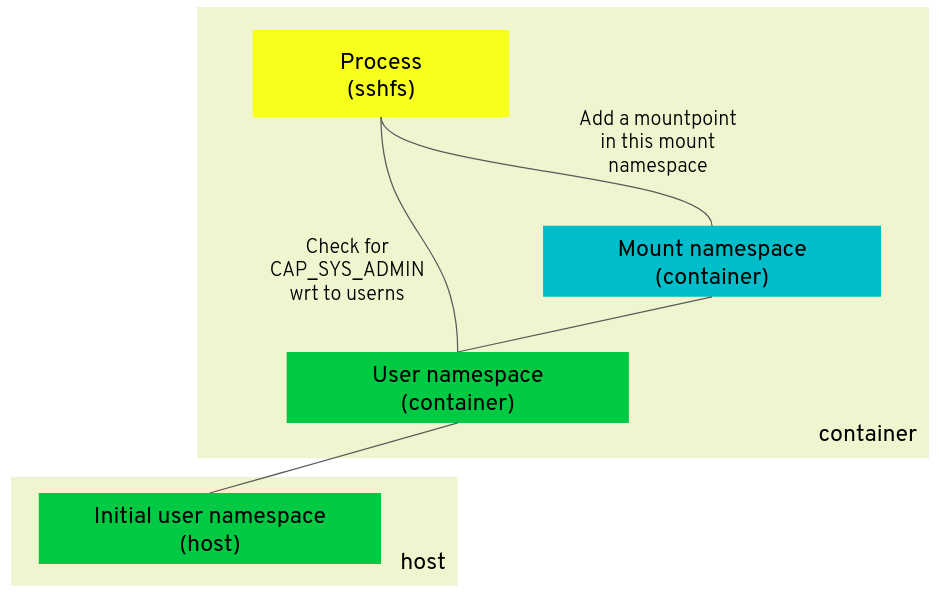 From the explanation above, it looks like thanks to user namespaces, it is possible to allow containers to mount filesystems without being root on the host. But depending on the filesystem, there are more pieces that come into play. Linux keeps a list of filesystems deemed safe for mounting in user namespaces, marked with the FS_USERNS_MOUNT flag . Creating a new mount in a non-initial user namespace is only allowed with those filesystem types. You can find the list in the Linux git repository with:

As you can see in the table below, new filesystem mounts in non-initial user namespaces were initially restricted to only procfs and sysfs, and then more and more filesystems were allowed along the years to be mounted in user namespaces. This is because it takes time to ensure that a filesystem is safe to use by unprivileged users.

As an example, there was CVE-2019-5736 ( fix in runc ) where the host runc binary could be overwritten from the container. The announcement of the vulnerability mentions that using user namespaces is one of the possible mitigations.

We had a blog post explaining the details of the issue and how Flatcar Container Linux mitigated it in a different way, by using a read-only filesystem for hosting the runc binary. The diagram below shows the sequence of steps used by runc to create a container, and how the /proc/self/exe can be a reference to runc. For more details about how that works, see our blog post .

The Kubernetes User Namespaces KEP ( KEP/127 ) lists a couple of other vulnerabilities that can be mitigated with user namespaces.

Before Linux 4.18, FUSE was not allowed in user namespaces but the effort to make it work was mostly complete: Ubuntu kernels already had a patch set to support it.

The missing part for Linux upstream was proper integration with the integrity subsystem, IMA (Integrity Measurement Architecture). On Linux systems that use IMA, the kernel can detect if files are modified before allowing processes to read or execute them. It enables an audit trail of what is executed. It can also enable the Linux Extended Verification Module (EVM) to enforce a policy to only execute programs if their content is known to be good or signed by a trusted encryption key.

As opposed to files stored on a local hard disk with a traditional filesystem, files on filesystems such as FUSE can be modified without the kernel being able to re-measure, re-appraise, and re-audit files before being served.

We wrote a patch on the memfs FUSE driver to demonstrate the following problem in this scenario:

At the time, there was a patch in discussion attempting to fix the issue with a “force” option in IMA that would force IMA to always re-measure, re-appraise, and re-audit files based on a policy, for example all files served by FUSE. We tested the effectiveness of that patch.

The first option explored was to patch IMA so that it recognises FUSE filesystems as special and use the “force” option on them, so the measurements are performed for each request, even if the kernel didn’t detect any changes. We received the review that the IMA subsystem should not have to know the different filesystems in order to behave differently in the case of FUSE. Indeed, other filesystems could have the same issue such as remote filesystems. With this option, IMA needs to know about the behaviour of all filesystems, and it is putting this knowledge at the wrong layer.

In order to solve this, the second option explored was to introduce a new filesystem flag FS_NO_IMA_CACHE ( v1 , v2 , v3 , v4 ) that allows filesystems to announce to the IMA subsystem their own behaviour with regard to caching. The IMA subsystem can then check the flag and use the “force” option if the flag is present. In that way, the IMA subsystem does not need to know about the different filesystems.

However, the IMA “force” option does not solve all the issues and signatures still can’t be verified meaningfully. In the end, the following solution was implemented in Linux 4.17 by IMA maintainers:

After this IMA fix in Linux 4.17, FUSE filesystems in a non-initial user namespace are finally allowed in Linux 4.18.

Although user namespaces are supported in OCI container runtimes like runc, this feature is not available in Kubernetes. Ongoing, unsuccessful, efforts in Kubernetes to add user namespace support date back to 2016 starting with this enhancement issue .

At the time of this first attempt, Kubernetes had already introduced the Container Runtime Interface (CRI) but it was not yet the default. Nowadays, however, the Kubelet communicates with the container runtime via the CRI’s gRPC interface and is the main target to introduce support for user namespaces. 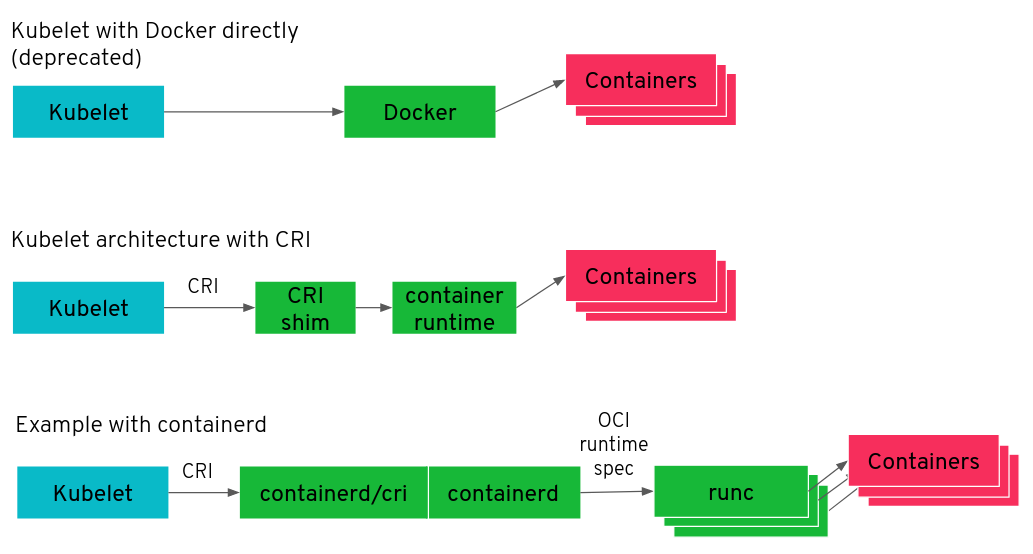 The diagram above shows different architectures for the Kubelet’s communication with the container runtimes:

The exact changes in the CRI to support user namespaces are still in discussion. But the general idea is the following: 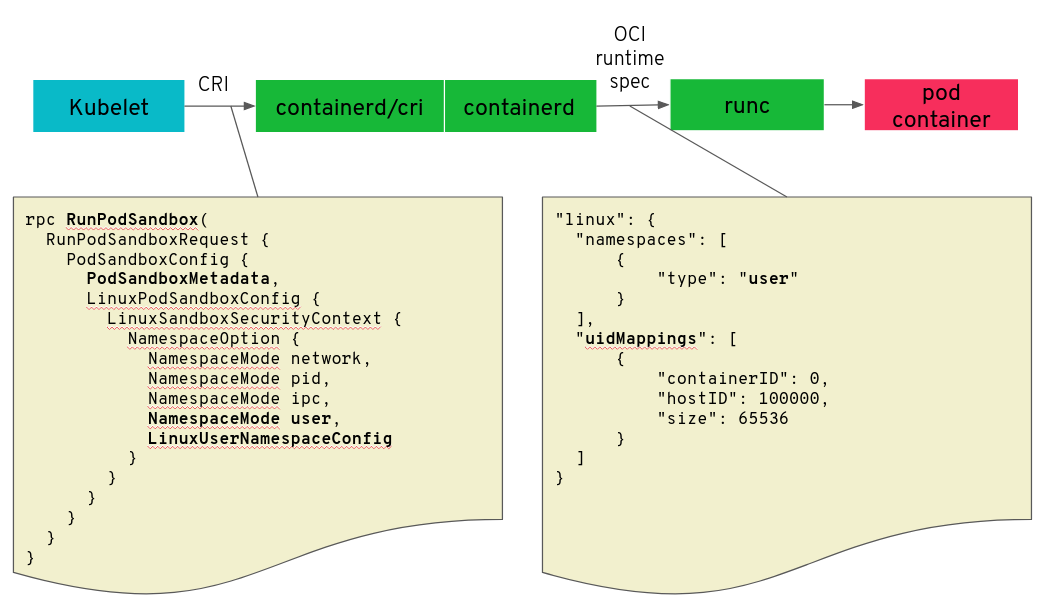 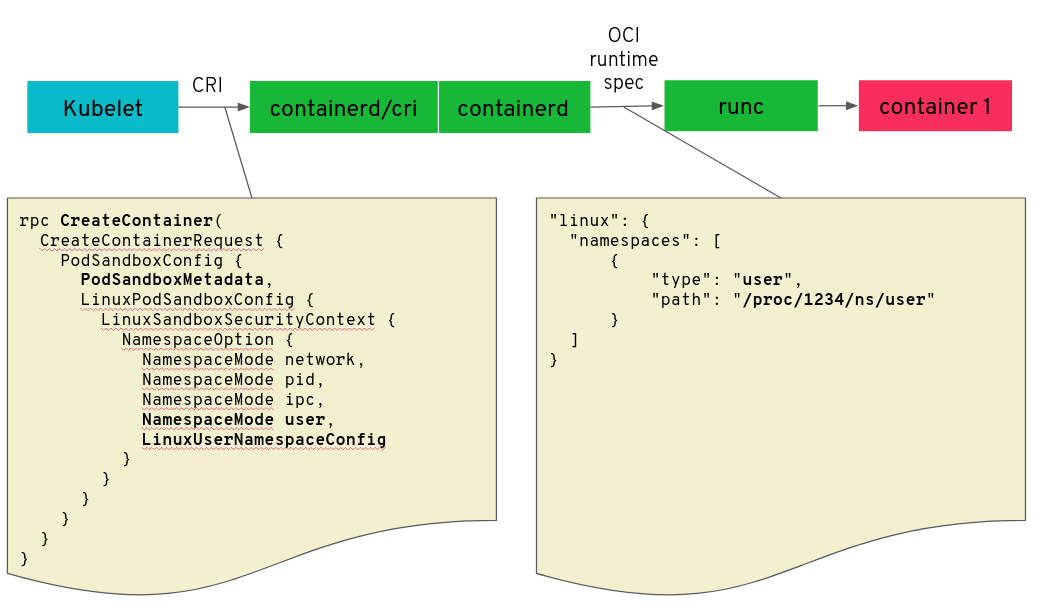 In this way, the user namespace will be shared by the different containers in the pod.

The IPC and network namespaces are also shared at the pod level, allowing the different containers to communicate with each other using IPC mechanisms and with the network loopback interface respectively. The IPC network and network namespace are owned by the user namespace of the pod, allowing the capabilities of those namespace types to be effective in the pod but not on the host. For example, if a container is given CAP_NET_ADMIN in the user namespace, it will be allowed to configure the network of the pod but not of the host. If a container is given CAP_IPC_OWNER, it can bypass the permissions of IPC objects in the pod but not on the host. 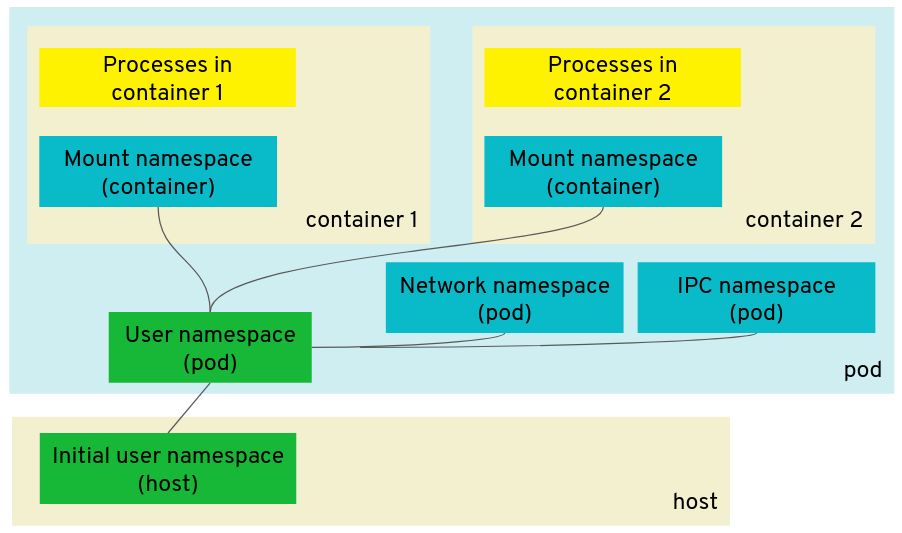 A big challenge for user namespaces in Kubernetes is support for volumes. I mentioned in the introduction that different containers should ideally have different sets of user IDs so that they have better isolation from each other. But it introduces a problem when the different containers need to access the same volumes.

Consider the scenario below: 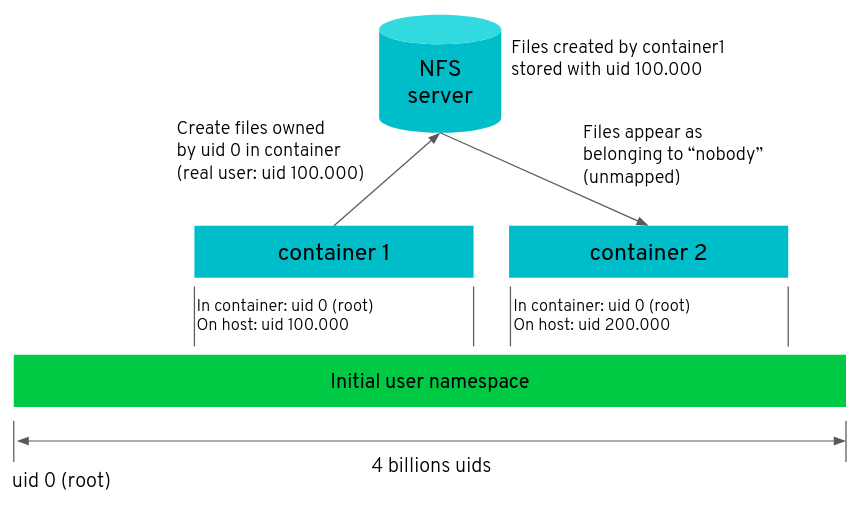 There are different possibilities to address this problem:

Our current proposal makes it possible to use the first possibility and it could be extended later when a better solution arises.

Note that there are plenty of workloads without volumes that would benefit from user namespaces today, so not having a complete solution today should not block us from incrementally implementing user namespaces in Kubernetes.

User namespaces is a Linux primitive that is useful for providing an additional layer of security to containers. It has proven to be a useful mitigation in several past vulnerabilities. Although it still suffers for some shortcomings with volumes support, Linux kernel development is active in that area. I expect future improvements to build on the improvements that have been made over the last years.

We’re proud to contribute to that community effort in Kubernetes. Once Kubernetes support for user namespaces is complete, Kubernetes will gain a better security isolation between container workloads and the Linux hosts. It will also open the door for new use cases of running containers with more privileges, something that is today — without user namespace support — too dangerous to do.